Better than Spain, worse than Libya?

When discussing barriers to trade in Latin America, corruption almost undoubtedly comes up, particularly from companies that have no experience in the region and often from those who tend to see Latin America as one big homogeneous block. Media and stereotypes don’t help, either.  For us doing business in the region on a daily basis, the difference is clear. There are very corrupt countries that we all know about and those that we know we can rely on for transparency. It is something you grow up knowing and over decades, as well all know, idiosyncrasies don’t change dramatically.

But how do you explain this to those outside the region? That is when stats (check out our post on how and why to use stats when researching Latin American markets here) come in handy, and Transparency International’s Corruption Perceptions Index is one of the best we know. The 2019 figures have just been released and they tell an interesting story for those interested in doing business in the region.

To start with, as well always say, not all of Latin America is the same. As our headline indicates: Chile and Uruguay do rather well, Venezuela is a total disaster. Chile and Uruguay are less corrupt according to this index than Italy, Spain and Portugal – would you stop doing business in those three countries because of corruption concerns? Then why would companies rule out doing business with “Latin America” based on transparency concerns and exclude a developed and potentially very lucrative market as a result?

Similarly, Uruguay (where we are based) does better than France and the US, and only slightly worse than Ireland. Quite revealing. Both Chile and Uruguay do better than any country in Eastern Europe. The table below clearly shows the huge difference in performance across Latin American countries:

This also shows that looking at one index in isolation is not enough: while you would have chosen countries like Mexico, Colombia and Peru due to their economic openness (free trade agreements, for example), they are clearly not transparency success stories. While you might praise Paraguay’s rather business-friendly (low) tax system, you might value Uruguay or Costa Rica’s transparency more instead.

Expanding abroad is a long-term process, so you should also be interested in trends. As we see below, Argentina has been improving (10 points since 2015) while Brazil has got worse (8 points since 2012). 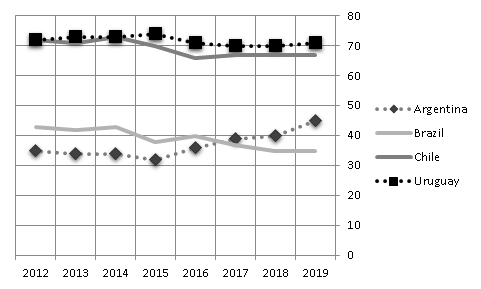 As we discussed before, it is important to take transparency/corruption into account for a number of reasons, including the fact that transaction costs are higher the least transparent a country is, corrupt countries grow less than transparent ones and the risks increase as corruption increases.

To sum up: while some Latin American countries like Venezuela reinforce the stereotype of a very corrupt region, others like Uruguay and Chile perform even above European levels. Again, exporters should look at individual markets rather than seeing Latin America as a block. That will make it easier to spot opportunities that competitors will overlook.