Buenos Aires: 2 for the price of 1

I love Buenos Aires. That’s why I can think of almost any excuse to visit. Being interested in construction, BATIMAT Expo Vivienda was the perfect excuse. The construction (focused on housing) trade and consumer show wasn’t as big as one would expect from a country the size of Argentina, but this is no surprise given the current economic situation (the country is at the brink of a default) and the difficulties importing. In terms of size, the show was similar actually to BIEL (lighting and electricity), which I visited last year. 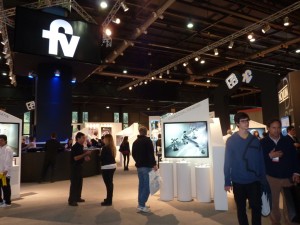 Having said that, the show (more architectural than “construction”, I’d say) made it clear that business in Buenos Aires is not at a standstill. Homes, offices, hospitals, retail spaces and so on are being built, and someone is supplying them. The quality, innovation and the variety of local suppliers was impressive, as well as the number of famous names present. Those are the brands that Argentineans are loyal to, because they’ve been loyal to them through many (many) ups and downs, in a country where economic cycles seem so marked. 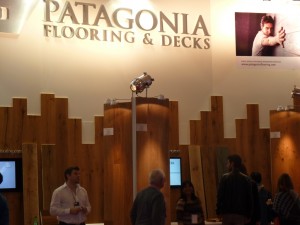 But I wasn’t going to spend a whole weekend at this small show. Crossing the River Plate from Montevideo on the ferry also meant for me the opportunity to stay at and get to know better one very cool, trendy and totally charming neighbourhood of Buenos Aires: Palermo. In particular, the unique treasure of Palermo Soho.

Now, if you’re a regular to this blog, you know we mean business, and we leave the rest to talented travel bloggers. So these are my three business/export thoughts from a weekend in Palermo Soho, Buenos Aires, Argentina:

1- Argentina is going through tough times. If you follow us on twitter, you’ll know that. But don’t expect the crisis to evidence itself in Palermo Soho. This upmarket area with its boutiques, restaurants and gallery arts will not give you many clues about any crisis. 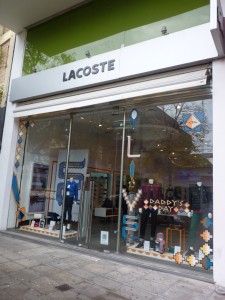 2- Don’t expect Buenos Aires to be at a standstill, lamenting its current luck, tango-style. If you read the papers about how the country is doing, you would be forgiven to think that the city is all about poverty, protests and desperation. Argentineans have been there before. Yes, there is poverty. Yes, there is instability. But driving through Buenos Aires you also see lots of very expensive cars cars, busy shops (for all budgets), bustling streets. People are buying “stuff”, they go to work, they study, they live. The country is not at all at a standstill and Buenos Aires is still one of the most dynamic capital cities in the world (and one of the most charming, in my opinion). 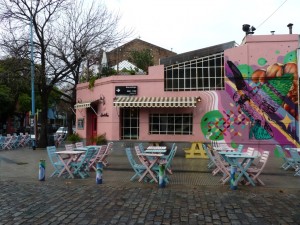 This cafe got insanely busy at lunchtime!

3- British sells. Yes, ok, I know you’ll ask me about the Falklands…. So let’s stick to the evidence. I was in Buenos Aires nearly three days and I saw many, many Union Jacks used in apparel and decoration, for example – and no-one was burning them down… And they were clearly not aimed just at British tourists… You hear British music, you can buy all sorts of British delicacies, and even delight/punish (delete as you see fit) yourself with English football here. I’d like to point out I travelled with my English husband, who is also a big fan of Buenos Aires, and who has never felt unsafe here. And look what we spotted right there in Palermo Soho: 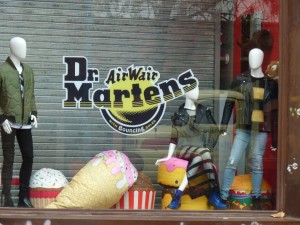 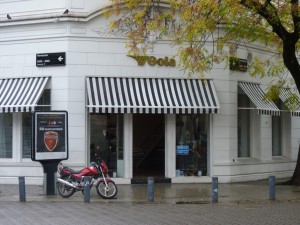 Doing business with Argentina currently is tough. But it’s not impossible. Clearly, lots of foreign businesses are doing well here. And there’s a national election next year. So watch this space. There’s a lot more to Argentina and Buenos Aires than polo, Messi and tango – and there’s business to be done here.