Here’s a test for you. If you smile while you read these phrases, you have done or attempted to do business with Latin America…

“They seemed so interested at the trade show, so friendly as well, I dropped them an email but never heard back”.

“I sent our distributors four emails, this week alone, but they are not even acknowledging them”.

“After sending them all our marketing materials by email, including our price lists, we never heard back. We sent a few emails to check they had received the information, but no response at all. I suppose we were too expensive?”

“Yes, I think I saw your email, I just didn’t read it, what was it about?”

Let me share my latest one with you, from a Uruguayan business contact: “it’s so nice doing business with you, Gabriela, you 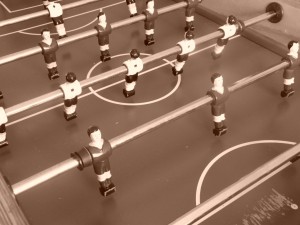 Sometimes it feels like you're talking to one of these.

are so… unique… [I was well flattered here and expected some kind of magnificent explanation for my uniqueness, here it comes…]… you even reply to your emails”. Wow. I am truly, truly special, indeed.

If you have suffered the frustration of getting no response to your emails from your Latin America contacts, you are not alone (count me in!). It took me two hours on a flight to Lima (following many non-responses from many contacts, as usual) and I finally cracked it. It is like marmite. You love it, or you hate it. Like telenovelas, you see. People do it or don’t do it. And it doesn’t matter whether they run a business or not, it is, like so many other things in Latin America, all about passion and people. Don’t try to use your British logic here, it just doesn’t work.

–          Some people will do email perfectly well and there will be absolutely no problem at all whatsoever in communicating with them (there’s hope!)

–          Most (a vast majority) don’t understand what a “read receipt” is (I personally don’t even know the word for it in Spanish) and if they understand, they would think it’s rude and trust-breaking, so try to avoid  these.

–          If your contact doesn’t do emails, they won’t start doing it for you (as much as you would like to “educate” them), so either give up on the whole thing or adapt. I know there are some people I just need to ring up (I confirm what is discussed in emails that only the CIA probably reads), and there’s a lot of them. You can reach a middle ground but more likely than not, the non-respondent wins (damn it!).

Why?! You probably ask. I could write a whole PhD thesis on this but let’s say there are generational issues here (not generalising, though, there are always exceptions), business culture reasons (some businesses don’t communicate internally by email and don’t have this kind of culture themselves) and general cultural reasons. As I always remind my readers and clients, business in Latin America is personal. A lot of people just won’t get why you email (a “lower form” of communication, clearly) instead of calling, for example, or popping by (if you realistically can). I find that here in Uruguay an email quickly leads to a coffee somewhere. Of course I can’t do the same with Mexico or Panama, but a skype call here or there, especially with video, really won’t hurt.

And you see I haven’t even touched on the language issue, because this goes so much more beyond it. You can love or hate marmite, but you can’t change how the person next to you feels about it. Emails are one of the few but critical things in my opinion that really differentiate Latin American and European (particularly British/Northern European) business cultures. It is one of those things that really highlights our cultural differences, our different expectations, ways of doing businesses and even our core values.

In some cases, when I start typing an email, I just take a deep breath, cancel it all, and pick up the phone. It just gets the job done.