I hope to see a Union Jack (Expo Alimentaria)

I am travelling to Lima, the legendary capital city of Peru, this Sunday on behalf of a client, and I might just be able to find some time before I head back to Montevideo to visit ExpoAlimentaria, one of Latin America’s largest shows for the food and drink sector. Peru is now the culinary capital of Latin America, so this show is particularly relevant.

I was at another food and drink trade show in Brazil earlier this year (SIAL) and its neighbouring food tech trade show (FISPAL) and you might remember my disappointment when I discovered there were only a handful of British exhibitors (in a combination of two shows in a country of 200m people that happens to be next hosting both the FIFA World Cup and the Olympics) and no British Pavillion (thumbs up for the Japanese, Dutch, American, German, Spanish ones…). Certainly the same wouldn’t happen in Peru, right? 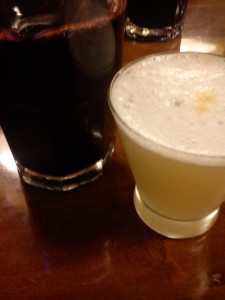 Chicha morada and pisco sour, from our last trip to Lima.

Out of curiosity I was going through the list of exhibitors today (from food and drink producers through to service providers, machine manufacturers and much more) and I quickly realised there weren’t any British exhibitors. Ok, this show is not TAP funded by UKTI, but is that a good enough reason for this remarkable absence? I really hope I have completely missed something here! I did check with the organisers, who also confirmed there is no British pavilion (we all know UKTI are pressed for resources and I am not judging their criteria to allocate funding to trade shows, but businesses in the UK can’t surely just rely on one source of initiative and funding, right?).

Peru is one of the strongest economies of Latin America, its “economic performer”, as the IMF indicated, forecasting a 6.1% growth for this year. Its food and drink sector is particularly dynamic and the growth is tremendous. And Peru and the EU have a Free Trade Agreement…

Some countries seem to be making the most of the opportunities. I hear there will be a Dutch Pavilion and I have already spotted exhibitors from Italy, Spain, Germany, Canada and the US, apart from fellow Latin Americans.

I completely understand that exhibiting at a trade show is costly in many ways and I really hope this is not a sign that British companies are not making the most out of the opportunities in Peru, and in Latin America in general. I hope many are looking beyond the Andes for business and I might even bump into them at the hotel… At the show, I hope to see a Union Jack or two. It would be such a missed opportunity otherwise.

We’d love to hear your comments on this article. What is stopping you from doing business in Peru? How about the rest of Latin America? Feel free to email us at or join the discussion on LinkedIn.

Expoalimentaria Peru runs between 15th -17th October 2013. Apart from the exhibition, there are interesting talks on topics such as packaging and organic food. Find out more at http://www.expoalimentariaperu.com/ Even if you can’t make it this year, how about getting ready for their next edition?